These Simple Food Changes Can Lead to Better Sleep

Eating healthy isn’t just good for our waistlines. It turns out, our diet affects sleep in a major way.

While this is still a topic we’re learning more about, a growing amount of research in the last few years has highlighted the connection between what we eat and how we sleep.

I know how enjoyable reaching for that sugary box of cereal in the morning or indulging in a midnight snack can be. But before doing the same, hang on for just a moment. Here are a few key points to consider when it comes to your diet and your sleep.

Your Diet Affects Your Sleep

You can think of food’s relationship to sleep in the same way you think about fuel for your car; sure, you can put the cheapest gas in your tank, but in the long run, it can start to take its toll on your engine.

The same goes for your diet. Putting certain foods in your system might taste good momentarily, but they can end up costing us severely when we’re laying in bed later …

Quality Sleep, Your Immune System, and the Coronavirus Outbreak

The coronavirus outbreak that has devastated China and left the world scrambling for answers has also reinforced the important role sleep plays in building our immune systems.

In a nutshell: Making sure we consistently get a good night’s sleep is one of the best ways we can improve our immunity and defend against viruses and disease. Sleep is a natural immune booster.

This is something we’ve known intrinsically for centuries, with a healthy dose of sleep often being paired with crackers and a warm bowl of soup when we are fighting back against the common cold. Modern research has only continued to highlight how interconnected sleep and the immune system are. We’ll dive into that relationship in just a moment.

But to be clear, I’m not suggesting sleep is a cure-all for coronavirus. That isn’t the case; currently, there is no vaccine for the infection. The coronavirus has, by Feb. 20, killed more than 2,100 people globally. Altogether, nearly 75,000 cases have been confirmed, mostly in China, where the country has ground to a halt as it looks to safeguard …

Have you committed to a new healthy eating routine this year? Wondering how sleep can assist in making your healthful dietary choices easier to stick to and more effective? These are some of the most potent sleep and diet connections that even nutritionists often miss.

Tip: Sleep naked and in a cool environment

Our bodies contain several different types of fat, and they perform different functions. Certain kinds of fat actually work to burn energy, rather than storing it. White fat stores energy, brown and beige fat actually burn calories, and keep insulin working properly, help regulate blood sugar, and guard against obesity. Studies in mice show that animals with higher amounts of brown fat are leaner, and have better metabolic health. Research involving humans has shown brown fat is linked to lower body mass. On the other hand, a lack of brown fat in mice is associated with higher insulin resistance, higher blood sugar, and diabetes. Scientists have discovered beige fat activates a protein that works to burn calories and generate heat

Now I know what you’re probably thinking: “if I’m laying in bed, how am I being productive — and earning more?”

Of course, you can’t sleep the day away. But plenty of research in the last few years shows prioritizing a good night’s sleep, rather than working late into the night and only getting a few hours of rest, is a great move for your career. And it turns out, it doesn’t even take that much sleep to have a profound impact.

One study, from two researchers at UC San Diego, drove this point home. The key finding was that participants who reported a “one-hour increase in long-run average sleep” increased their wages by 16%, which was the “equivalent to more than one year of schooling.”

That’s pretty remarkable: simply working your way up to about 8-9 hours of sleep each night provided the same career boost as the time it takes for many people to complete a Master’s program — and it costs …

Building a Better Brain Through Sleep

When we think of quality sleep, we typically think of it in relation to how it helps our body recover from a long day — and with good reason.

As I’ve talked about before, a good night’s sleep can work wonders for the body, whether it’s alleviating severe back pain or helping you bounce back from a tiring gym session.

(You can find out the best time for your body to work out by finding out your chronotype. If you don’t already know it, it’s easy to learn by taking this quiz: www.chronoquiz.com.)

But consistent, uninterrupted sleep goes beyond preserving and improving your body. Just as importantly, a good night’s sleep is essential when it comes to building a better and healthier brain.

Sleep plays a key role in memory retention, alertness, and improved creativity, among other benefits. These benefits apply to any age group.

Let’s run through a number of ways sleep helps improve your brain.

But first, keep in mind that you want to stay cool during the night. Research has shown between 60 and 67 degrees …

In the United States and around the world, cannabis is more popular than ever. Attitudes about cannabis are changing fast—and so are laws that govern its use for medical and recreational purposes. As has been the case for thousands of years, people use cannabis for a variety of reasons, many therapeutic, including to alleviate anxiety and relieve pain. One of this ancient medicinal plant’s most popular uses through the ages? To help with sleep.

What does science tell us about cannabis’ effectiveness in treating the most common sleep disorder, insomnia? That’s what I’ll be discussing today, with a look at the latest science on the effects of cannabis on insomnia.

What is insomnia, exactly?

First, let’s tackle a quick refresher on what insomnia is, because it’s a term that carries a lot of meaning and detail. At its essence, insomnia is a difficulty falling sleep and/or staying sleep, when you have the time and circumstances to get the sleep you need. Insomnia exists both as a set of symptoms and a clinical disorder. That’s to say, people can experience

How Sleep Impacts Testosterone and Why It’s Important

Growing older comes with a few challenges. Beyond having your hair turn grey — if you’re lucky enough to keep it — your body also starts to decline. This includes a drop in testosterone production, a critical hormone for both men and women.

The relationship between aging and testosterone is evident to anyone that’s watched late night TV or a football game in the last 6 months. Frankly, it’s hard not to catch a commercial marketing some wonder pill that promises to help guys fight off “low T” and have them feeling like they’re back to being 25.

But the fact is, by 30, testosterone levels start dropping about 1% per year on average. By the time many men and women reach their 40s and 50s, they experience many of the common symptoms of low testosterone production, including a diminished sex drive and everyday sluggishness.

It’s no wonder, then, that the market for testosterone replacement therapy is booming, with Marketwatch estimating it’ll hit $1.4 billion in the U.S. by 2024.

But one thing seems to be going overlooked: the …

New Science on the Health Benefits of Melatonin—and How Well Does it Really Work For Sleep?

Most people think of melatonin as primarily—or even exclusively—a sleep remedy. Melatonin, of course, is critical for healthy sleep. The body’s own melatonin production is essential to circadian rhythm regulation, and the maintenance of daily sleep-wake cycles.

As a supplement, melatonin has grown tremendously in popularity, largely on the basis of its reputation as a sleep promoter. Indeed, melatonin is among the top 5 natural products used in the United States, according to the National Institutes of Health. Between 2007 and 2012, use of melatonin doubled among adults in the US, rising to slightly more than 3 million.

Here’s what’s fascinating: some of the most broad and potent benefits of melatonin may lay outside the sleep realm. As this interesting Medscape article explains, scientists are learning more and more about the role melatonin can play in treating and preventing disease. At the same time, the effectiveness of melatonin’s most well-known use—sleep—remains something of an open question in the scientific community, even as millions of people take melatonin regularly for sleep.

Read on to learn what the latest science

Bedwetting alarm proves successful for many 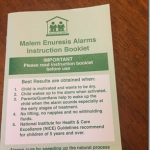 Malem Enuresis Alarms’ Instruction booklet and progress chart. Please see my other blogs which accompany the use of this alarm (please search bed wetting or alarms). This alarm was advised to us by our physiotherapist and it was very successful. We used other types and they were not successful.

The post Bedwetting alarm proves successful for many appeared first on The Sleeping Blog.

from The Sleeping Blog https://letsleepingblogslie.net/bedwetting-alarm-proves-successful-for-many/…

The Power of Naps: The Benefits of Napping We Can Learn From Da Vinci

If you’re like me, you enjoy taking a good nap. And who doesn’t? Some of history’s brightest figures were known to be big time nappers, including Albert Einstein, Thomas Edison, and Leonardo da Vinci.

But while da Vinci was undoubtedly a genius — he was a prolific sculptor, engineer, architect, inventor and painted the Mona Lisa — mirroring his sleep schedule wouldn’t be the smartest move you could make. In fact, I strongly advise against it.

As an adult, it’s believed he passionately avoided getting a full night’s sleep. Instead, he was a dedicated napper, taking 20 minute naps every 4 hours throughout the day. This, of course, only adds up to 2 hours of sleep every 24 hours.

His thought process was simple: He thought he couldn’t afford to spend 8 hours sleeping — he had too much to get done and not enough time to do it. At one point, da Vinci famously said “sleep resembles death,” removing all doubt as to how he felt about the topic.